Tips for the New iOS 8 Update 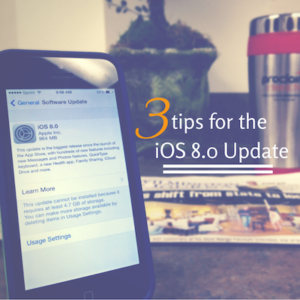 Last week the world anxiously awaited the announcement of the new iPhone and iWatch. Apple didn’t disappoint. (I realize Apple decided to call their watch the Apple Watch, but I’ll still be calling it the iWatch. Old habits die hard.) And with the announcement of the iPhone 6 and 6 Plus came the release of their latest update, iOS 8.

Yesterday, Apple users frantically deleted apps, music, and photos to make room for the biggest iOS update since Apple announced the App Store. I know because I was one of them. Not only did I delete half of my photos (which is quite a bit since I’m a photographer), but I also deleted half of my apps. What can I say . . . I was excited to see all of the fancy changes Apple had made to my coveted iPhone. With the new update, I awoke this morning to find several app updates due to the new operating system.

3 Tips to Ease You Into the New iOS8 Update

Why? As it turns out, the update doesn’t really require you to delete the images of your first born child or your honeymoon in Mexico, nor do you have to delete that free U2 album (unless you have something against Bono). The software update just needs ample space (mine required 4.6 free GBs) to download the 1.2 GB update. If you don’t have the space, don’t fret. Sync your iPhone or iPad to your computer and download the update there. Then transfer it to your device. Be sure to select “Check for Update” not “Restore.”

So enjoy the new iOS 8! Next up in my #FirstWorldProblems: splurge for the 64GB iPhone 6 or 6 Plus?

Rachel has been passionate about photography since childhood. She graduated from UNC-Wilmington with a degree in Film Studies, and when she is not creating photos for our clients or managing projects, she can be found spending time with her 14 nieces and nephews, reading, watching movies, or playing beach volleyball.
Facebook: The End of Like-gating 5 Tips for Editing Your DNN Website